Absinthe Events Near You 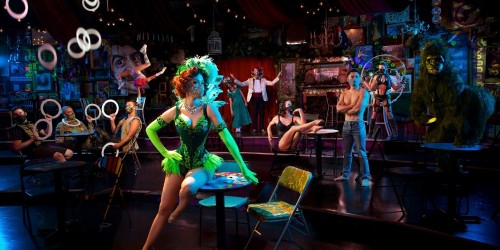 Absinthe is a live show that premiered in 2006 and is playing on the forecourt of Caesars Palace, Las Vegas, after opening on April 1, 2011. Paul Carr of The Huffington Post, proclaimed "If I could only see one show my entire life," he said, "I'd want it to be that." It was also called "The Greatest Show In Vegas History" by Las Vegas Weekly

The show is hosted by the character The Gazillionaire, originally played by former Cirque du Soleil clown Voki Kalfayan. His original assistant (2006-2015), Penny Pibbets was portrayed by actress Anais Thomassian. In 2015 the character Joy Jenkins was introduced, "a kewpie doll-goofy sidekick inspired by Moe of The Three Stooges." Developed and played by the American clown Jet Eveleth, "who masterminds the show. Joy is truly the heart of the show."