Anastasia Events Near You 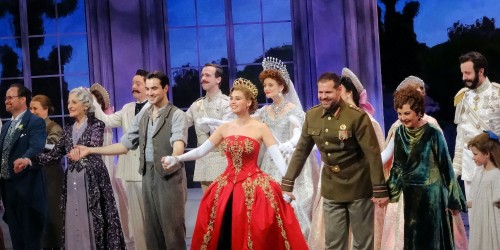 Anastasia is a musical with music and lyrics by Lynn Ahrens and Stephen Flaherty, and a book by Terrence McNally, a team who notably contributed to the musical Ragtime in 1997. Based on the 1997 film of the same name, the musical adapts the legend of Grand Duchess Anastasia Nikolaevna of Russia, who could have possibly escaped the execution of her family. Years later in the musical adaptation, an amnesiac orphan named Anya appears as the main character. Anya hopes to find some trace of the family she has lost by siding with two con men who wish to take advantage of her likeness to the Grand Duchess. Over the course of the adventures in the musical it is strongly assumed that Anya is in fact the lost Duchess, though it is never stated explicitly. The show has gone through many adaptions and opened on Broadway with Christie Altomare as Anya on April 24th, 2017. There it lived for 2 years before closing on March 31st, 2019. It received mixed reviews along the way, but was sustained by the female audiences that grew up with the 1997 FOX film.

After completing a pre-Broadway run in Hartford, Connecticut, the show premiered on Broadway at the Broadhurst Theatre in April 2017, and since then it has spawned multiple productions worldwide.