Andrea Bocelli Events Near You 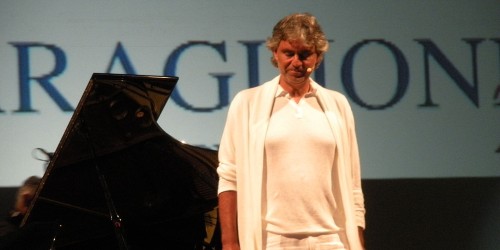 Andrea Angel Bocelli OMRI OMDSM (Italian pronunciation: [anˈdreːa boˈtʃɛlli]; born 22 September 1958) is an Italian opera singer, songwriter, and record producer. Celine Dion has said that "if God would have a singing voice, he must sound a lot like Andrea Bocelli," and David Foster, a record producer, often describes Bocelli's voice as the most beautiful in the world.

Following a football accident, Bocelli was diagnosed with Traumatic glaucoma, becoming completely blind at age 12. Since 1982, Bocelli has recorded 15 solo studio albums of both pop and classical music, three greatest hits albums, and nine complete operas, selling over 90 million records worldwide. He has had success as a crossover performer, bringing classical music to the top of international pop charts.

In 1998, Bocelli was named one of People magazine's 50 Most Beautiful People. In 1999, he was nominated for Best New Artist at the Grammy Awards. "The Prayer" is his duet with Celine Dion for the animated film Quest for Camelot which won the Golden Globe Award for Best Original Song and was nominated for the Academy Award for Best Original Song. He captured a listing in the Guinness Book of World Records with the release of his classical album Sacred Arias, as he simultaneously held the top three positions on the US Classical Albums charts.

Bocelli was made a Grand Officer of the Order of Merit of the Italian Republic in 2006 and was honored with a star on the Hollywood Walk of Fame on 2 March 2010 for his contribution to Live Theater.