Backstreet Boys Events Near You 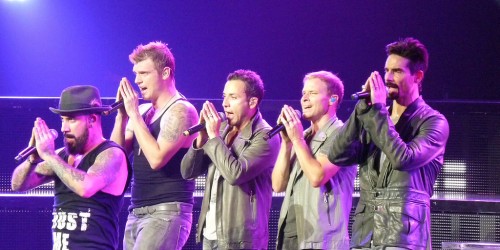 The group rose to fame with their debut international album, Backstreet Boys (1996). In the following year, they released their second international album Backstreet's Back (1997) along with their self-titled U.S. debut album, Backstreet Boys (1997), which continued the group's success worldwide. They rose to superstardom with their third studio album Millennium (1999) and its follow-up album, Black & Blue (2000). They also released a greatest hits album, The Hits - Chapter One (2001), with their only single, "Drowning". After a two-year hiatus, they regrouped and released a comeback album Never Gone (2005). After the conclusion of the Never Gone Tour in 2006, Richardson left the group to pursue other interests. The group then released two albums as a quartet: Unbreakable (2007) and This Is Us (2009).

In 2012, the group announced that Richardson had rejoined them permanently. In the following year, 2013, they celebrated their 20th anniversary and released their first independent album, In a World Like This (2013). Their album DNA (2019) debuted at number one, more than two decades after the group formed, and 19 years after they last topped in 2000. They also became the first boy band to top the U.S. album charts in three decades.

The Backstreet Boys have sold over 100 million records worldwide, making them the best-selling boy band of all time, and one of the world's best-selling music artists. They are the first group since Led Zeppelin to have their first ten albums reach the top 10 on the Billboard 200, and the only boy band to do so. The albums Backstreet Boys and Millennium were both certified diamond by the Recording Industry Association of America (RIAA), making them one of the few bands to have multiple diamond albums. The group received a star on the Hollywood Walk of Fame on April 22, 2013. The group also announced their residency show, Backstreet Boys: Larger Than Life in Las Vegas from March 2017 to April 2019. The group also released their first documentary movie, titled Backstreet Boys: Show 'Em What You're Made Of in January 2015.