Billy Joel Events Near You 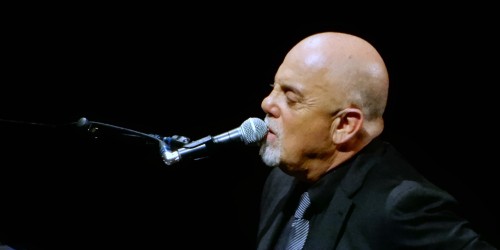 William Martin Joel (born May 9, 1949) is an American singer-songwriter, composer, and pianist. Commonly nicknamed the "Piano Man" after his first major hit and signature song of the same name, he has led a commercially successful career as a solo artist since the 1970s, having released twelve studio albums from 1971 to 1993 as well as one studio album in 2001. He is one of the best-selling music artists of all time, as well as the sixth best-selling recording artist and the third best-selling solo artist in the United States, with over 150 million records sold worldwide. His 1985 compilation album, Greatest Hits Vol. 1 & 2, is one of the best-selling albums in the US.

Joel was born in 1949 in The Bronx, New York, and grew up on Long Island, both places that influenced his music. Growing up, he took piano lessons at the insistence of his mother. After dropping out of high school to pursue a musical career, Joel took part in two short-lived bands, The Hassles and Attila, before signing a record deal with Family Productions and kicking off a solo career in 1971 with his first release, Cold Spring Harbor. In 1972, Joel caught the attention of Columbia Records after a live radio performance of the song "Captain Jack" became popular in Philadelphia, prompting him to sign a new record deal with the company and release his second album, Piano Man, in 1973. After releasing the albums Streetlife Serenade and Turnstiles in 1974 and 1976 respectively, Joel released his critical and commercial breakthrough album, The Stranger, in 1977. This album became Columbia's best-selling release, selling over 10 million copies and spawning several hit singles, including "Just the Way You Are", "Movin' Out (Anthony's Song)", "Only the Good Die Young", and "She's Always a Woman"; another song on this album, "Scenes from an Italian Restaurant", is Joel's favorite of his own songs and has become a staple of his live shows.

Joel's next album, 52nd Street, was released in 1978 and became his first album to peak at No.1 on the Billboard 200 chart. Joel released his seventh studio album, Glass Houses, in 1980 in an attempt to further establish himself as a rock and roll artist; this release featured "It's Still Rock and Roll to Me" (Joel's first single to top the Billboard Hot 100 chart), "You May Be Right", "Don't Ask Me Why", and "Sometimes a Fantasy". His next album, The Nylon Curtain, was released in 1982, and stemmed from a desire from Joel to create more lyrically and melodically ambitious music. An Innocent Man, released in 1983, served as an homage to genres of music which Joel had grown up with in the 1950s, such as rhythm and blues and doo-wop; this release featured "Uptown Girl" and "The Longest Time", two of his most well-known songs today. After releasing the albums The Bridge and Storm Front in 1986 and 1989 respectively, Joel released his twelfth and to date final studio album, River of Dreams, in 1993. He went on to release Fantasies and Delusions, a 2001 album featuring classical compositions composed by Joel and performed by British-Korean pianist Richard Hyung-ki Joo. Joel also provided voiceover work in 1988 for the animated Disney film, Oliver & Company, in which he played the character Dodger, and contributed to the soundtracks to several different films, including Easy Money, Ruthless People, and Honeymoon in Vegas.