Blake Shelton Events Near You 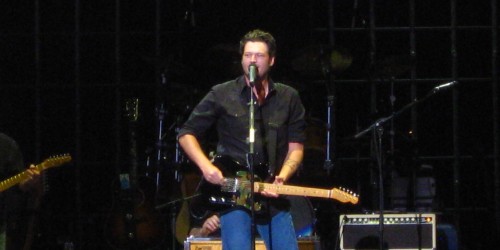 Blake Tollison Shelton (born June 18, 1976) is an American country music singer and television personality. In 2001, he made his debut with the single "Austin". The lead-off single from his self-titled debut album, "Austin" spent five weeks at number one on the Billboard Hot Country Songs chart. The now Platinum-certified debut album also produced two more top 20 entries ("All Over Me" and "Ol' Red").

As of November 2019, Shelton has charted 40 singles, including 26 number ones, 17 of which were consecutive. The 11th No. 1 ("Doin' What She Likes") broke "the record for the most consecutive No. 1 singles in the Country Airplay chart's 24-year history". He is an eight-time Grammy Award nominee.

Shelton is also known for his role as a judge on the televised singing competitions Nashville Star, Clash of the Choirs, and as a coach The Voice. He has been on The Voice since its inception, and in six of eighteen seasons (2–4, 7, 11, 13), a member of his team has won.