Come From Away Events Near You

Come From Away Events 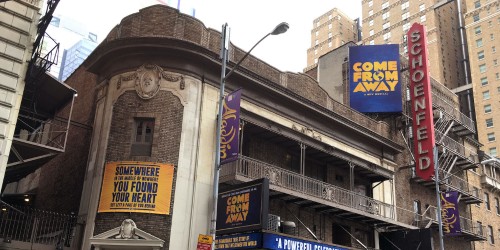 "Come From Away" Tickets at Best Price!

About "Come From Away"

Come from Away is a Canadian musical with book, music and lyrics by Irene Sankoff and David Hein. It is set in the week following the September 11 attacks and tells the true story of what transpired when 38 planes were ordered to land unexpectedly in the small town of Gander in the province of Newfoundland and Labrador, Canada, as part of Operation Yellow Ribbon. The characters in the musical are based on (and in most cases share the names of) real Gander residents as well as some of the 7,000 stranded travellers they housed and fed.

The musical has been received by audiences and critics as a cathartic reminder of the capacity for human kindness in even the darkest of times and the triumph of humanity over hate.

After being workshopped in 2012 and first produced at Sheridan College in Oakville, Ontario, in 2013, it went on to have record-breaking runs at the La Jolla Playhouse in San Diego, California and the Seattle Repertory Theatre in 2015, at the Ford's Theatre in Washington, D.C., and the Royal Alexandra Theatre in Toronto in 2016. It opened on Broadway at the Gerald Schoenfeld Theatre on March 12, 2017, and became a critical and box office success, routinely playing to standing-room-only audiences even during previews. In October 2018 it became the longest-running Canadian musical in Broadway history, surpassing The Drowsy Chaperone's previous record of 674 performances.

Baz Bamigboye announced on Twitter on June 7, 2018, that a London production of Come from Away would be coming in February 2019. He said that the show would first premiere in The Abbey Theatre in Dublin in December and then would transfer to The Phoenix Theatre. He also stated that an official announcement would come on Canada Day.

At the 71st Tony Awards in 2017, it was nominated for seven awards including Best Musical, Best Original Score, Best Book of a Musical and Best Featured Actress in a Musical for Jenn Colella, ultimately winning for Best Direction of a Musical for Christopher Ashley.