Hamilton Events Near You 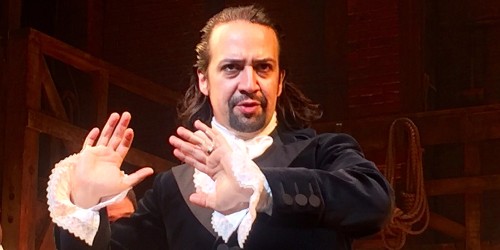 Hamilton is a musical with music, lyrics, and book by Lin-Manuel Miranda. It is inspired by the 2004 biography Alexander Hamilton by historian Ron Chernow.

The musical tells the story of American Founding Father Alexander Hamilton through music that draws heavily from hip hop, as well as R&B, pop, soul, and traditional-style show tunes; the show also incorporates color-conscious casting of non-white actors as the Founding Fathers and other historical figures. Through this use of modern storytelling methods, Hamilton has been described as being about "America then, as told by America now."

The show premiered at the Public Theater Off-Broadway on February 17, 2015, where its engagement was sold out; it won eight Drama Desk Awards, including Outstanding Musical. It then transferred to the Richard Rodgers Theatre on Broadway, opening on August 6, 2015, where it received uniformly positive reviews and strikingly high box office sales. At the 2016 Tony Awards, Hamilton received a record-setting 16 nominations, eventually winning 11 awards, including Best Musical. It received the 2016 Pulitzer Prize for Drama.

The Chicago production of Hamilton began preview performances at the CIBC Theatre in September 2016 and officially opened the following month. The West End production of Hamilton opened at the Victoria Palace Theatre in London in December 2017, winning seven Olivier Awards in 2018, including Best New Musical. The first U.S. national tour of the show began performances in March 2017. A second U.S. tour opened in February 2018. Hamilton's third U.S. tour began January 11, 2019, with a three-week engagement in Puerto Rico featuring Miranda in the lead role.