Harry Styles Events Near You 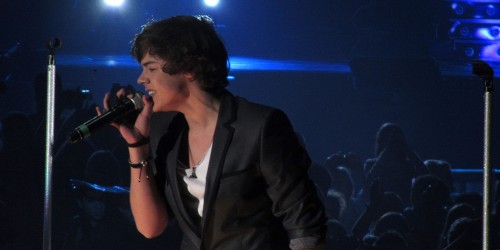 Harry Edward Styles (born 1 February 1994) is an English singer, songwriter, and actor. His musical career began in 2010 when he auditioned for the British singing competition The X Factor. He was eliminated early on, but was brought back to form the boy band One Direction. The band finished in third place and signed with Syco. They earned four number-one studio albums on the Billboard 200, and four top-five singles on the Billboard Hot 100. They embarked on four world tours and won a number of accolades. The band went on an indefinite hiatus in 2016.

Styles signed with Columbia Records as a solo artist in 2016. His self-titled debut album was released in 2017 and topped the charts of fourteen countries. His debut single, "Sign of the Times", was released earlier that year and topped the charts in seven countries, including the UK Singles Chart; it also peaked at number four on the Billboard Hot 100, and was named Rolling Stone’s Single of the Year. Styles also made his film debut in Christopher Nolan's war film Dunkirk (2017), which was a critical and commercial success. His second studio album Fine Line will be released on 13 December 2019.