Joe Rogan Events Near You 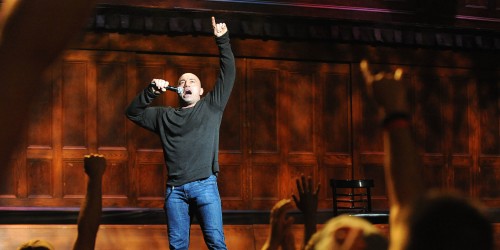 Joseph James Rogan (born August 11, 1967) is an American comedian, podcaster, and UFC color commentator. He is also a former actor and television presenter.

Rogan began his career in comedy in August 1988 in the Boston area. After relocating to Los Angeles in 1994, he signed an exclusive developmental deal with Disney, and appeared as an actor on several television shows including Hardball and NewsRadio. In 1997, he started working for the Ultimate Fighting Championship (UFC) as an interviewer and color commentator. Rogan released his first comedy special in 2000. From 2001 to 2006, he was the host of Fear Factor. In 2009, Rogan launched his podcast The Joe Rogan Experience, which led him to increased success and podcast superstardom.