Phish Events Near You 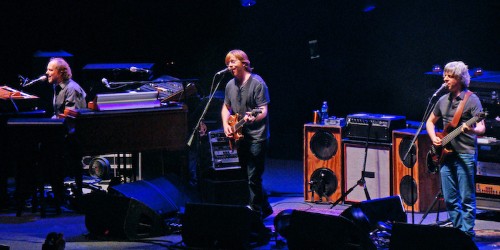 Phish is an American rock band that formed in Burlington, Vermont in 1983. The band is known for musical improvisation, extended jams, blending of genres, and a dedicated fan base. The band consists of guitarist Trey Anastasio, bassist Mike Gordon, drummer Jon Fishman, and keyboardist Page McConnell, all of whom perform vocals, with Anastasio being the primary lead vocalist.

The band was formed by Anastasio, Gordon, Fishman and guitarist Jeff Holdsworth, who were joined by McConnell in 1985. Holdsworth departed the band in 1986, and the quartet lineup has remained in place since then. Their lineup stable, Phish performed together for 15 years before beginning a two-year hiatus in October 2000. The band regrouped in late 2002, but disbanded in August 2004 after a farewell performance at their Coventry Festival in Vermont. They reunited in March 2009 for a series of three consecutive concerts at Hampton Coliseum in Hampton, Virginia, and have since resumed performing regularly.

Phish's music blends elements of a wide variety of genres, including funk, progressive rock, psychedelic rock, folk, country, jazz, blues, bluegrass, and pop. The band was part of a movement of improvisational rock groups, inspired by the Grateful Dead and colloquially known as "jam bands", which gained considerable popularity as touring concert acts in the 1990s.

Phish has developed a large and dedicated following by word of mouth, the exchange of live recordings, and selling over 8 million albums and DVDs in the United States. In 1998, Rolling Stone described Phish as "the most important band of the '90s." The magazine later wrote that the band helped to "spawn a new wave of bands oriented around group improvisation and extended instrumental grooves".