The Stadium Tour Events Near You 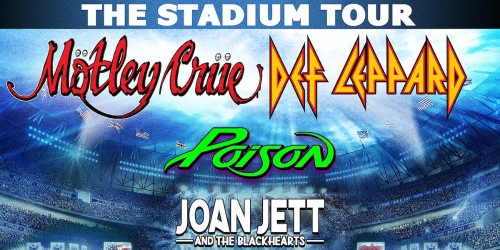 About "The Stadium Tour"

Mötley Crüe, Def Leppard, Poison Detail 2020 Tour
"The Stadium Tour" is an upcoming co-headlining tour by English rock band Def Leppard and American rock band Mötley Crüe. Poison and Joan Jett & the Blackhearts are special guests on the tour. The tour was announced on December 4, 2019. This will be Mötley Crüe's first major tour since 2015. Tuk Smith and The Restless Hearts had been added as an additional opening act on January 10, 2020.

Originally set for summer 2020, it has been announced that the tour would be rescheduled for 2021 due to the COVID-19 pandemic.

Tickets available now for sale for "The Stadium Tour".