The Weeknd Events Near You 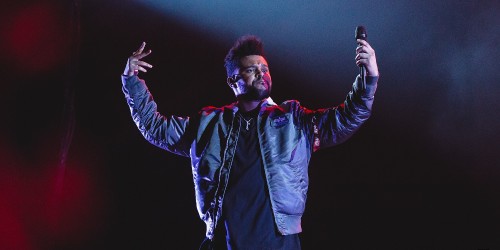 "The Weeknd" Tickets at Best Price!

Abel Makkonen Tesfaye (born February 16, 1990), better known by his stage name The Weeknd, is a Canadian singer, songwriter, actor and record producer. In 2010, he anonymously uploaded several songs to YouTube under the name "The Weeknd" and released the mixtapes House of Balloons, Thursday, and Echoes of Silence in 2011 which quickly gained him a following and recognition from several mainstream publications due to his dark wave-style of R&B and the mystique surrounding his identity.

House of Balloons, Thursday, and Echoes of Silence were later remastered and re-released on the compilation album Trilogy (2012). In 2013, The Weeknd released his debut album Kiss Land and followed it up with Beauty Behind the Madness (2015), which became his first Billboard 200 number-one album and featured the Billboard Hot 100 number-one singles "Can't Feel My Face" and "The Hills". The Weeknd also became the first artist to simultaneously hold the top three positions on the Billboard Hot R&B Songs chart with "Can't Feel My Face", "Earned It", and "The Hills". At the 56th Grammy Awards, Beauty Behind the Madness won Best Urban Contemporary Album and was nominated for Album of the Year. A year after the release of the album, The Weeknd released his third album Starboy (2016) which spawned the Billboard Hot 100 number-one hit "Starboy". His debut EP My Dear Melancholy (2018) debuted at number one on the Billboard 200.

Also involved in business ventures, The Weeknd announced a partnership with Puma, as a Global Brand ambassador in 2016. He has his own XO branded merchandise, which was furthered by a collaboration with H&M to present its Spring 2017 campaign. In October 2017, he began marketing and promotion on a partnership with Marvel on Instagram. A week later, he attended New York Comic-Con and it was revealed that a Starboy comic book would be released on June 13, 2018, with the title character being a superhero modelled after himself.

The Weeknd has won three Grammy Awards, two American Music Awards, nine Billboard Music Awards, nine Juno Awards, and has been nominated for an Academy Award. "The Hills" was certified Diamond by the Recording Industry Association of America (RIAA). One of the most successful Canadian artists, The Weeknd was awarded the Allan Slaight Award by Canada's Walk of Fame for "making a positive impact in the fields of music, film, literature, visual or performing arts, sports, innovation or philanthropy". He has sold over 70 million records in the US.